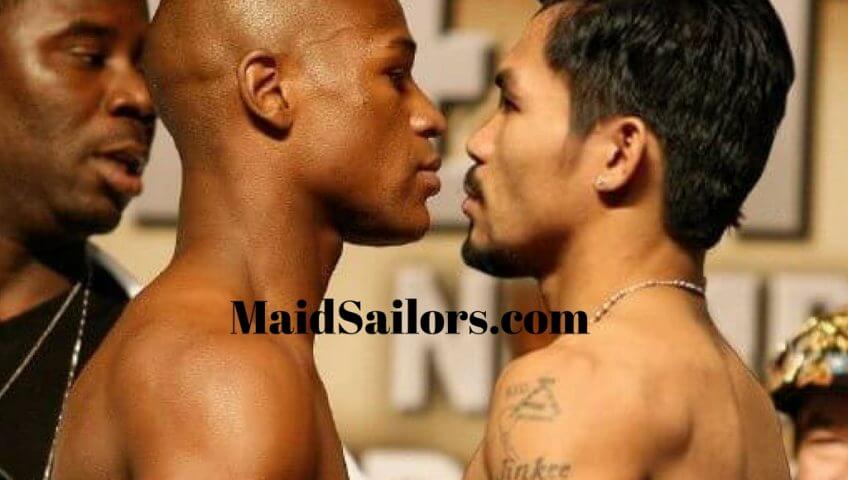 It’s almost fight night! The Mayans were indeed early in their prediction of the apocalypse – exactly three years too early. The world will end tomorrow night as it witnesses the most important battle of all time. On Saturday, May 2nd, at 10:30 pm (EST), the undefeated Floyd “Money” Mayweather Jr.

If you’re not a boxing fan (don’t worry, very few people actually are), it’s still worth knowing the finer details because the fight will be broadly syndicated to millions of viewers (including your co-workers). This will is, after all, one of the most anticipated boxing matches of all time: despite the $100 price tag for pay-per-view ordering (yes, pay-per-view still exists), the fight is still expected to generate over $300 million in proceeds. This will also be the first time a fighter is paid over $100 million to take a beat-down; said differently, Mayweather and Pacquiao will split the total purse 60% and 40% (respectively). Do you really want to miss the chance to see a cocky, filthy rich, undefeated fighter finally lose?

Make this a memorable experience for you and your friends. Organizing a viewing party won’t be expensive if you split the cost of the PPV bill. Especially when compared to the alternative of buying a ticket for $30+ to view the fight at a crowded, “bro-infested” bar. We’ll show you how to prepare your place properly. And afterward, you can call Maid Sailors to knock out any remaining cleaning challenges.

If you’re hosting your party on the east coast, chances are many attendees will show up after they’ve eaten dinner. Thus, no need to emulate a Super Bowl set-up; focus on lighter snacks that minimize crumbs and potential garbage

Pro Tip: Don’t place the snacks in front of the television.

Read this before you snicker. If the only trash-receiving-entity in your home will be the trashcan in your kitchen, you’re asking for a Round 6 disaster. Make things easy for yourself (and your guests) by placing 2-3 evenly spaced trash throughout your living room (e.g. corners). Further, feel free to label the bags with “recycling”, “cans only”, “food/other”, etc. In order to provide your guests with some direction and ultimately lessen the cleaning burden on Sunday morning.

There’s nothing more satisfying than resting your eyes on an unnaturally organized pile of garbage bags. The alternative? Get ready for a mosaic of food trays, aluminum cans of Bud Light, Solo Cups and half-eaten Pizza (let’s be real, you’ll order Dominos at some point against our recommendations).

Bulk Up on Toilet Paper and Paper Towels

You need these anyway, so why not use the party as an opportunity to stock-up? Place excess rolls of toilet paper in the bathroom and paper towels in the kitchen. Keep them visible and unleash your inner Chief Executive Officer – people will most-likely take it upon themselves to clean a mess or wipe a spill they’ve made if the tools are in the open. Don’t miss a knock-out because someone couldn’t find the Bounty Paper Towels you stowed away.

Your Sink is a Cooler Version of a Regular Cooler

Unless you have an industrial-sized cooler that you’ve consistently used, you should empty a couple bags of ice into your sink and throw a couple of cans on it. This avoids any potential spills that could arise from a standalone cooler and eliminates the imminent task of dumping excess water. This also disqualifies the sink as a de-facto storage area for solo cups, empty cans, and other trash (trust us, even the most familiar guests are often unpredictable creatures).

The finer details of your fiesta are up to you. If you’re planning on having a beer, avoid glass bottles and opt for aluminum cans. These are safer and easier to clean (also no stray bottle caps will be hiding inside your couch). Generally speaking, solo cups, paper plates, napkins and paper towels should be considered “must-haves”.

If you’re having food delivered or catered, opt for disposable forks and knives as well. The next morning, despite how the fight goes, feel free to call Maid Sailors if you decided to disregard all of this advice ( a cleaning might even be cheaper than ordering the fight itself) .