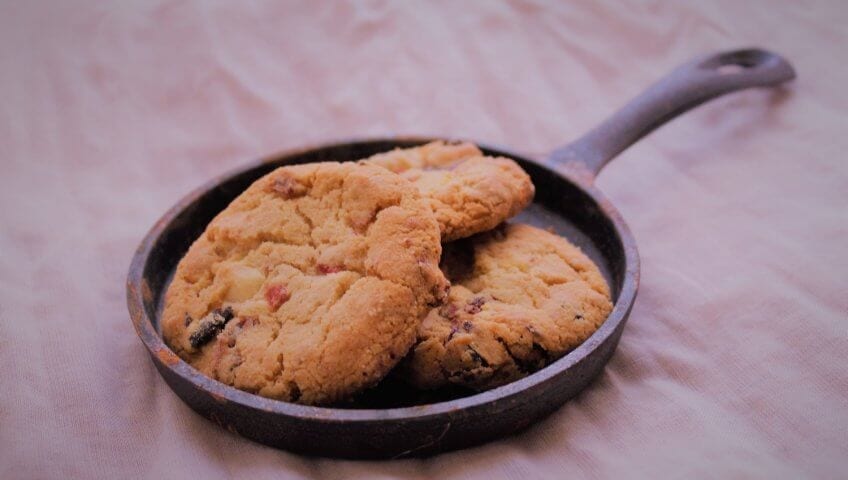 How To Clean a Cast Iron Skillet

Whether you’ve recently picked up a cast-iron skillet or have had one sitting in your cupboards for quite some time, one fact remains: cast iron skillets and pans can be intimidating to cook. Their heavy weight and cumbersome size may leave you feeling unsure if you’ve never cooked with cast iron before, but the good news is that preparing your favorite dish in a cast iron skillet is not much different than any other pan.

In fact, many people find cast iron easier to work with due to the fact that seasoned pans are naturally non-stick and extremely durable. When properly cared for, a cast-iron skillet can easily last a lifetime! By having a better understanding of the benefits of cooking with cast iron and how to properly care for your cast iron pan, you can start cooking with more confidence!

Why Cook With Cast Iron?

If you’ve never cooked with a cast iron skillet before, there are so many reasons to start.

If you’re trying to watch your calories or limit your intake of fats/oils, then cooking with cast iron can be one of the easiest ways to do this. That’s because cast iron pans, when properly seasoned, typically don’t require the use of any additional oil, butter, or cooking spray. This means you can enjoy all the non-stick qualities of a greased-up pan without adding unnecessary calories to your food.

What about non-stick pans? While it’s true that non-stick pans can also cut down on the amount of butter or oil you cook with, these pans are often made with non-stick chemical coatings that can get released into your food over time. If you want to avoid ingesting chemical particles from non-stick pots and pans, making the switch to a cast-iron skillet is a great way to do this.

Can Be Placed in the Oven

Cast iron skillets are also extremely versatile; unlike some other types of pots and pans, they can be moved back and forth from the stovetop to the oven without causing damage. This makes them a great choice for recipes that call for searing meat (such as steak) before popping them into the oven to finish cooking. Just be sure to use an oven mitt when transferring a cast iron pan from stovetop to oven (or the other way around), as the handles can quickly become hot.

Cooking with cast iron is also an easy yet effective way to add some iron to your food! If you have low iron levels or suspect that you do, consider cooking with cast iron before you begin taking an iron supplement (which can sometimes mess with your stomach). Of course, you should always speak to your doctor if you suspect you have an iron deficiency.

Often times, people are hesitant to cook with cast iron because they’re not sure how to properly clean these types of pans. Unlike a traditional non-stick pan, you can’t simply throw your cast iron skillet into the dishwasher when you’re done using it. Instead, you’ll need to take some special measures to care for and clean your cast iron, Otherwise, you could end up with rust and other issues that could affect your cooking experience or the flavor of your food.

Cleaning and Caring for a Cast Iron Skillet

So, what exactly do you need to do (and not do) when it comes to caring for your cast iron skillet? There may be a slight “learning curve” as you get used to taking care of a cast-iron pan, but once you get the hang of it, you’ll likely find that these durable pans are very low maintenance and can last for decades to come.

Start With a Seasoned Skillet

Part of what makes cast iron skillets so special is the coat of “seasoning” they develop over time. This seasoning refers to a layer of oils that gives your pan its non-stick qualities. Many cast iron pans sold today come “pre-seasoned” so you don’t need to do a thing once you bring your pan home. A pre-seasoned skillet will generally have a sleek black appearance, but should not be oily or greasy to the touch. Other pans, however, are not pre-seasoned—so you’ll need to do this yourself before cooking.

Clean Immediately After Use

The secret to keeping your cast iron skillet in the best possible shape for many years to come is to always clean it out as soon as possible after you’re done cooking. In most cases, the best way to clean a cast iron pan is to run it under warm water and rinse away any food debris. From there, while the pan is still wet, add a bit of kosher salt to the pan and use a soft sponge or rag to scrub away the remaining debris in circular motions. From there, simply rinse and you should have a clean skillet!

Water and cast iron don’t mix; always be sure to completely dry your cast iron skillet as soon as you’re done washing it so that you don’t end up with rust spots.

Don’t Be Afraid to Use Soap

Generally, it’s best to be as minimally invasive as possible when cleaning your cast iron skillet. The fewer chemicals you use, the better. Still, cast iron is pretty resilient so there’s no harm in scrubbing with a bit of your favorite dish soap if you have some particularly challenging food debris to get rid of.

If you’re finding that your cast iron doesn’t have the sheen it used to or that your food is starting to stick to the pan while you cook, then it may be time to re-season your skillet. There are many ways to do this, but perhaps the easiest way is to heat your skillet over medium-high heat on the stovetop. From there, apply a couple tablespoons of cooking oil to the surface of the pan until it smokes and there is no residue left. Repeat this several times to create a new coating.

With just a little care, a quality cast iron pan can last a lifetime (and then some!). Still, if you’re feeling overwhelmed by caring for your cast iron on top of all your other household cleaning tasks, Maid Sailors can help. We offer competitive pricing and a 100% satisfaction guarantee so you can book a cleaning with confidence! Contact us today at (212) 299-5170 to get started.